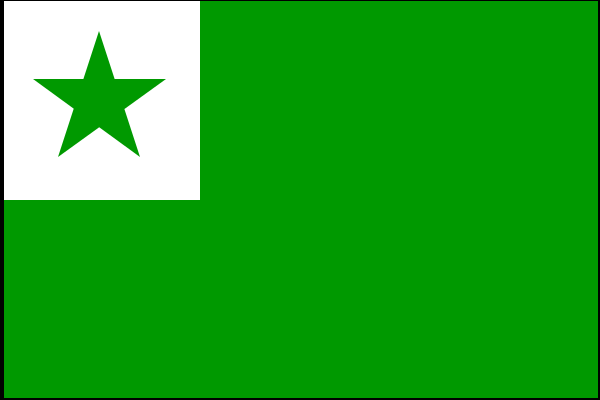 So why, you may be wondering, is there all this stuff about Esperanto on this website? Why would Esperanto be of particular interest to Quakers? For that matter, what is Esperanto anyway, and why would anyone be interested in it?

Esperanto is first and foremost a language. It is an artificial language invented towards the end of the 19th century by a Polish Jew, an ophthalmist by profession, called Ludwig Zamenhof. His basic idea was that if people of different nationalities could talk to each other and understand each other, they would get to know each other and find out for themselves what people in other countries are really like, rather than relying on xenophobic caricatures in the newspapers. Then maybe they would not be so ready to go to war and fight against their new friends whenever their governments told them to. As you can see already, this Esperanto was not just a language-game like some secret code: it had a social and philosophical agenda as well. More on that later!

Those of us who are not natural linguists may find the idea of learning another language, however worthy, rather daunting. Zamenhof was aware of this and deliberately made Esperanto the easiest language you are ever likely to hear of. For one thing – unlike English – it is entirely phonetic. If you see a word written you know exactly how it is pronounced. Nouns have no declensions or genders to memorise, and in fact the entire grammar is set out in just 16 basic rules.

All too often we hear the objection that there is simply no need for Esperanto because “everyone speaks English”. Of course if your experience of foreign travel is confined to lying on a beach in a tourist resort with hundreds of other British holiday-makers, and communication with local people does not go much beyond ordering fish and chips from a waiter, then you might come home with that impression, but then you have not really been abroad. However you do not have to stray far from the well-trodden tourist traps to discover the difficulties in trying to explain to the person behind a shop counter exactly what has gone wrong with your mobile phone, or to a police officer that you simply did not understand the parking regulations.

All too often in fact behind the bizarre idea that “everybody speaks English” lurks the unspoken prejudice “and if they don’t then they jolly well ought to” and this sums up exactly why Esperanto is needed. That is just the kind of cultural imperialism that Esperanto seeks to expose and to overcome.

Now perhaps it is becoming clearer why this invented language should be of particular interest to Quakers. There are two words at the heart of the Esperanto movement which will be very familiar – and very important – to Quakers as well, namely: peace, and equality. These are of course two of the most fundamental of the Quaker testimonies, but they are also ideals which permeate the whole of Esperanto culture. The potential for Esperanto as a tool for peace-making and international understanding has been mentioned already. Moreover precisely because it is an “invented” language, it is not “owned” by any one nation. Everybody comes to it on equal terms. It is not something imposed by one people upon another. It is the ultimate practical expression of international equality, solidarity and friendship.

To take one example: at the International Esperanto Congress that took place in Lille in France during July 2015 a young Lebanese told of how the Congress had given him his first ever opportunity to meet and to talk with Israeli people. It was not just the fact that they could converse in a common and in a “neutral” language – though that was important of course. Equally significant was the mere fact that such an encounter was possible at all, which he said could not conceivably have taken place under any other circumstances.

Here, then, in concrete terms, is the practical benefit of Esperanto and in particular the reason why Quakers need to take an interest in it. You say you believe in peace and equality? Here is a way to live the dream! You can take a positive step and be part of it.

Last but not least, Esperanto is fun! You get to know a whole new world-wide community of like-minded people, and if you participate in the various gatherings and activities that are going on all over the place – such as the various national and international congresses that occur in a different place every year – then you not only get to make new friends, but you see a lot of the world in the process!

You are also welcome to contact the editor of this website to ask any questions about Esperanto by e-mail at  hastqua@gmail.com

You may also be interested to know that there is in fact a Quaker Esperanto Society, which has members in England, Northern Ireland, France, Germany, Switzerland, Norway and Poland: a truly international collection of Quakers able to communicate with each other in a common language. The Quaker Esperanto Society has its own website which you can visit at   www.noos.ch/kes/index

Also now, if you are feeling adventurous, you can try reading this a few of the pages from this website in Esperanto by clicking on the called  “Hejmo” (which means “Home”) at the top of the page.